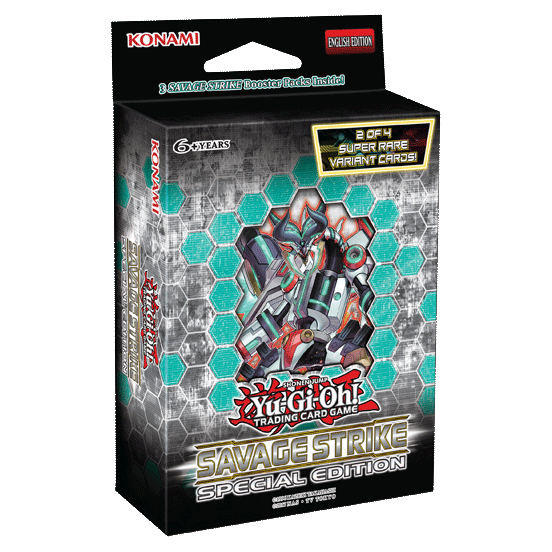 The Savage Strike Special Edition Is Jam‑packed With Value!

Not only does it include 3 booster packs of Savage Strike, each box is guaranteed 1 of 2 Super Rare variant cards, as well as 1 of 2 Super Rare preview cards of non-foil cards from the upcoming Spring 2019 booster set! The Super Rare variant card will be either Trickstar Crimson Heart, a Link Monster to go with the many powerful “Trickstar” cards in Savage Strike, or White Rose Dragon, a new monster designed specifically to enhance Decks built with cards from January’s Legendary Duelists: Sisters of the Rose. The preview card from Spring 2019’s booster set will be either Yuki-Musume, the Ice Mayakashi, a monster that adds a jolt of extra Summoning power to the Mayakashi Deck from Hidden Summoners, or a new Cyberse monster.

Synchro Summoning crashes into the VRAINS!
Duelists closely following the simulcast of Yu-Gi-Oh! VRAINS know that Synchro Summoning has made its first appearance in the latest Yu-Gi-Oh! anime! The first Synchro Monsters from the series will make their real life debut in Savage Strike!

This winter belongs to the undead!
Following on from Hidden Summoners and Structure Deck: Zombie Horde, Savage Strike introduces even more Synchro-based Zombie monsters. The Shiranui theme has been inexorably linked to Zombie Decks since the original release of Shiranui Solitaire, and now it returns in force with both a new Synchro Monster and a new Link Monster that pay dividends in Zombie Synchro strategies!

Return to Neo Space!
Elemental HERO Nebula Neos and Neo Space Connector were just the beginning! More new cards to power up Decks based on Jaden’s Elemental HERO Neos are on their way in Savage Strike! You can also find the basic cards you need to build a Neos Deck in Battles of Legend: Relentless Revenge and Shadows in Valhalla.

And that’s not even half of what awaits you in Savage Strike! You can also find a card that annihilates your opponent’s hand and field if they negate a Summon or the activation of a card or effect, a Spell that lets you trade part of your Extra Deck for card drawing, new “T.G.” monsters, and more!